Everyone said "The second baby will be so much easier" and I prayed they were right and I knew they would be. And so far, they are.

I mean, in my experience the fun, (and when I say fun I mean nightmare), doesn't really start with babies until they are 3 weeks old and don't do that thing anymore where they'll just sleep any on any old warm, stable surface for most of the day.

But for now, while Sam is doing this lovely thing that newborns do, I can actually genuinely appreciate it because I know it changes. And, unless I experience a serious rush of blood to the head, Sam will be my last child, which I now - released from the horrors of pregnancy - feel sad about, but in a good way. If that makes sense.

Kitty, (poor, poor Kitty), when she was born, signified the end of my life as I knew it. Sam is the beginning of my future; he is the first day of the rest of my life. Yes, I've got a newborn again, but I have never felt so free. I never left the house with Kitty when she was small because I couldn't quite believe the hassle of it and there were all those what ifs - what if she's sick, or screams, or does a poo? What then?? Easier to stay at home, thanks. Sam and I are out all the time: we take buses, we sit in cafes. Why did I not do this with Kitty? What was my problem?

And it turns out that I have remembered some valuable lessons about babies it took me months to learn first time:

1) if you put a baby down for a sleep and you know it is not hungry or cold or ill, it will eventually nod off, even if it squeaks and grunts and squirms or, even, emits the occasional bloodcurdling yelp.

3) give it a break, it's only a baby. Even if you are a total routine freak like me, deviations here and there - or entire days when absolutely everything goes tits up, don't matter. You have to just write the day off as a fucking disaster and start again tomorrow. Babies and small children respond best to persistence. It has taken an entire year to teach Kitty to say Please. Thank You she had no trouble with, but we've had to hammer Please into her just by saying it over and over and over and over again. Babies and little children are stupid, you need to repeat the things you want them to do, like, a billion times.

4) tiny babies do not get bored.

5) it's probably not meningitis.

Anyway, what OF Kitty? I have been asked over again what she thinks of Sam, how is she taking it? And I reply with what I always say about Kitty, which is that she doesn't give much of a fuck about anything, except the whereabouts of Rabbit, her blanket, Mr Tumble and the availability of biscuits.

She understands Sam is a baby, she gives him kisses, she only tries to jump on his head out of sheer exuberance, rather than malice, and knows that he doesn't like having his nappy changed. Other than that, she's unbothered. I think problems of jealousy and anger come later.

In the meantime, life for Kitty is simply super: her Daddy is around a lot on two weeks' paternity leave and they disappear together, scampering across London all day having an awesome time pointing at animals and eating chips. And most days a present turns up for her at the house, in commiseration for her having this "brudder". So in all, it's pretty nice for Kitty right now.

Me? I got jewellery. I don't understand especially the recent fashion for presenting one's wife with an expensive gift for having a baby. You are only fulfilling a biological imperative and it's not like a pregnancy isn't utterly miserable for fathers, too. (I bought Giles a pair of £140 sunglasses from Zadig & Voltaire to acknowledge this.) But still, I'm not one to pass up an opportunity to direct my husband and his Amex to Selfridges, so I requested this Anina Vogel charm necklace that was quite astoundingly expensive. It did for a birthday, wedding anniversary AND "baby" present, it was that pricey. I love it.

Here it is. You buy a naked necklace and then fill it with charms. Giles chose these - the Star of David is his idea of a joke (he is Jewish). The others are a cat (Kitty) and frying pan (cooking) a pistol (there were no rifles) a moses basket (new baby) and a typewriter (obvious).


And from lovely Babes With Babies I got THIS little beauty, which I really love. At £158, not as ruinously expensive as the Anina Vogel and if I was on a slightly tighter budget I would have requested this from my husband instead, you can have up to 20 characters engraved on it and Posh Spice has got one.

My readers get a 10% discount at Babes With Babies by typing RIFLE in at checkout. Don't say I never give you anything. 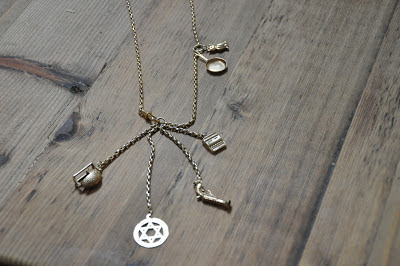 Title : Recipe Rifle goes shopping: JEWELLERY
Description : Everyone said "The second baby will be so much easier" and I prayed they were right and I knew they would be. And so far, they are...
Rating : 4.0 stars based on 100 reviews
← Newer Post Older Post → Home

Back to top!
Copyright 2013 Recipe Recipes - All Rights Reserved Design by Mas Sugeng - Powered by Blogger